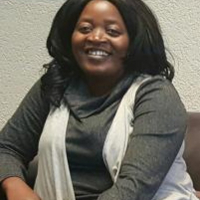 In 2020 Dr Nyanyiwe Mbeye of the Kamuzu University of Health Sciences, Malawi, was the prize-money recipient of the Anne Anderson Award from Cochrane. We caught up with her to find out about the impact of the award and the projects she’s involved in.

The Anne Anderson Award recognises a female who has made a significant contribution to the enhancement and visibility of women's participation within Cochrane. The winner designates the cash award of US $3000 to assist a woman from a low-resource setting with her Cochrane activities. Prof. Sophie Hill was the winner of the award and nominated Mbeye as the cash recipient.

“The award has greatly improved my profile in my country,” said Mbeye. “More people became aware of me as a go-to person in evidence-based healthcare. My university has recognised me as an expert in EBHC such that now I’m responsible for teaching about systematic reviews in all our post-graduate programmes. Based on the publicity, I’ve been approached by other organisations to help with training and to join high-level decision-making committees to help with synthesising evidence. The award has had a big impact – including giving me an advantage in applying for grants and things like that. I’d like to use this opportunity to thank Prof. Hill as well as Dr Tamara Kredo who helped to make this happen.”

Mbeye used the money to hire an intern with a Masters in Public Health for six months to assist in developing and teaching evidence-related short courses. The intern also attended train-the-trainer courses in evidence-informed decision making (EIDM), systematic reviews, evidence-based public health and scientific writing. The two have developed training content and are now planning presentations in other universities to introduce and sensitise people to systematic reviews and EIDM.

Mbeye’s introduction to the field began when she did a post-doctoral fellowship at the Centre for Evidence-based Healthcare (CEBHC) at Stellenbosch University. During this time she also became involved with Cochrane and worked on a review commissioned by the World Health Organization on task shifting in HIV. After her post-doc, she established the first academic unit in EIDM in Malawi.

“Through that I’ve been able to teach about systematic reviews, rapid evidence synthesis, evidence-informed policy making and other evidence-related courses to decision makers from the Ministry of Health, researchers and students.”

“There is a Knowledge-Translation platform established by the Ministry of Health so there are government structures already in place. Our unit works closely with the government to promote the use of evidence in decision making.”

Of course, the challenge as always is to find funding to further operationalise these activities. And while seeking international funding, Mbeye has joined other collaborations - initially the CEBHA+ (https://www.cebha-plus.org/https://www.cebha-plus.org/) project and more recently the GELA project (https://africa.cochrane.org/projects/global-evidence-local-adaptation-gela).

The Collaboration for Evidence-based Healthcare and Public Health in Africa (CEBHA+) project is about building long-term capacity and infrastructure for EBHC and public health in sub-Saharan Africa. GELA is about adapting global guidelines for local use (see article in this issue).

“We will work with guideline panels in countries to identify priority areas in newborn and child health,” explained Mbeye. “Once identified we will come up with new or adapt existing guidelines. It includes building capacity in evidence syntheses, and developing, packaging and communicating recommendations.”

Mbeye’s passion for ensuring research makes a difference comes from her student days.

“As students we conduct good research that could inform local decisions in hospitals and communities but mostly it’s just used for the degree then ends up on library shelves. In 2014 when I had finished my PhD I observed the gap to be bridged between research and decision making. So this has been in my mind for a long time.”

“Little by little I’m trying to address the gaps I’ve identified even though I don’t have my own dedicated funding,” she added. “I’m contributing to achieving that through these projects.”

She also believes the future is bright although challenging.

“There is growing interest in use of evidence for decision making. Countries are coming up with more deliberate projects to make sure that it’s done,” she said. “We should focus on building a critical mass in EIDM and include it in under- and post-graduate curricula. To prepare our graduates so that by the end of their training they will be demanding evidence for every decision they make. As future decision makers they should have that culture.”

“If it starts there it will become institutionalised.”

“We also have to provide the resources,” she added. “Things like internet connectivity. People should be able to find evidence. That’s important.”

And for her own trajectory she admits to being ambitious:

“I might not achieve this but I want us to become something like a Cochrane in my country. A place where people come for support in terms of decision making, synthesising and packaging evidence and evidence-informed guidelines. People should be looking at us for ‘everything evidence’ - saying if you want something evidence related, this is where you go. I want to be a trusted institution in terms of providing or supporting the country in EIDM. To achieve that I’m still working on building my capacity and building a team.”

“We are aware of the importance of using evidence but we are limited by a lack of resources. To get there is a challenge. I see my involvement in the GELA and CEBHA+ projects and the award as stepping stones to achieving these goals. I believe it will happen.”